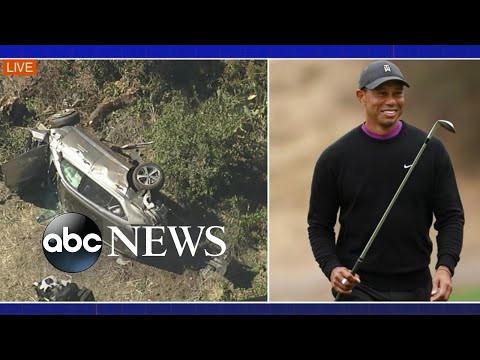 Famed golf star Tiger Woods was involved in a high-speed crash in California on Tuesday. Reports suggest the PGA pro was leaving a hotel at a high rate of speed just minutes before the crash. The vehicle Woods was driving, a Genesis SUV, reportedly flipped multiple times before coming to a stop. The airbags were deployed at some point during the incident and Woods was removed through the windshield when authorities arrived on the scene.

Tiger Woods agent Mark Steinberg has released a statement about the crash:

“Tiger Woods was in a single-car accident this morning in California where he suffered multiple leg injuries. He is currently in surgery and we thank you for your privacy and support.”

Woods injuries are said to be ‘non-life threatening’ but his legs are seriously injured. Multiple compound fractures could mean an end to Tiger Woods’ golf career, a though surely on his mind as he stabilizes. Response from the sports world was swift with many major celebrities, golfers and prominent figures wishing the golf legend a speedy recovery.